Links to my ADS Publications and arXiv Preprints.

1. Galaxies with Shells in the Illustris Simulation: Metallicity Signatures

Stellar shells are low surface brightness arcs of overdense stellar regions, extending to large galactocentric distances. In a companion study, we identified 39 shell galaxies in a sample of 220 massive ellipticals (\(\mathrm{M}_{\mathrm{200crit}} > 6 \times 10^{12} \, \mathrm{M}_\odot\)) from the Illustris cosmological simulation. We used stellar history catalogs to trace the history of each individual star particle inside the shell substructures, and we found that shells in high-mass galaxies form through mergers with massive satellites (stellar mass ratios \( \mu_{\mathrm{stars}} > 1:10 \) ). Using the same sample of shell galaxies, the current study extends the stellar history catalogs in order to investigate the metallicity of stellar shells around massive galaxies. Our results indicate that outer shells are often times more metal-rich than the surrounding stellar material in a galaxy’s halo. For a galaxy with two different satellites forming z = 0 shells, we find a significant difference in the metallicity of the shells produced by each progenitor. We also find that shell galaxies have higher mass-weighted logarithmic metallicities ([Z/H]) at 2 – 4 Reff compared to galaxies without shells. Our results indicate that observations comparing the metallicities of stars in tidal features, such as shells, to the average metallicities in the stellar halo can provide information about the assembly histories of galaxies.

2. Formation and Incidence of Shell Galaxies in the Illustris Simulation

Shells are low surface brightness tidal debris that appear as interleaved caustics with large opening angles, often situated on both sides of the galaxy center. In this paper, we study the incidence and formation processes of shell galaxies in the cosmological gravity+hydrodynamics Illustris simulation. We identify shells at redshift z = 0 using stellar surface density maps, and we use stellar history catalogs to trace the birth, trajectory and progenitors of each individual star particle contributing to the tidal feature. Out of a sample of the 220 most massive galaxies in Illustris (\(\mathrm{M}_{\mathrm{200crit}} > 6 \times 10^{12} \, \mathrm{M}_\odot\)), \(18\% \pm 3\%\) of the galaxies exhibit shells. This fraction increases with increasing mass cut: higher mass galaxies are more likely to have stellar shells. Furthermore, the fraction of massive galaxies that exhibit shells decreases with increasing redshift. We find that shell galaxies observed at redshift z = 0 form preferentially through relatively major mergers (\(\mu_{\mathrm{stars}} > 1:10\) in stellar mass ratio). Progenitors are accreted on low angular momentum orbits, in a preferred time-window between \(\sim\)4 and 8 Gyrs ago. Our study indicates that, due to dynamical friction, more massive satellites are allowed to probe a wider range of impact parameters at accretion time, while small companions need almost purely radial infall trajectories in order to produce shells. We also find a number of special cases, as a consequence of the additional complexity introduced by the cosmological setting. These include galaxies with multiple shellforming progenitors, satellite-of-satellites also forming shells, or satellites that fail to produce shells due to multiple major mergers happening in quick succession.

Self-gravitating bosonic fields can support stable and localised (solitonic) field configurations. Such solitons should be ubiquitous in models of axion dark matter, with their characteristic mass and size depending on some inverse power of the axion mass, \(m_a\). Using a scaling symmetry and the uncertainty principle, the soliton core size can be related to the central density and axion mass in a universal way. Solitons have a constant central density due to pressure-support, unlike the cuspy profile of cold dark matter (CDM). Consequently, solitons composed of ultra-light axions (ULAs) may resolve the ‘cuspcore’ problem of CDM. In DM halos, thermodynamics will lead to a CDM-like Navarro-Frenk-White (NFW) profile at large radii, with a central soliton core at small radii. Using Monte-Carlo techniques to explore the possible density profiles of this form, a fit to stellar-kinematical data of dwarf spheroidal galaxies is performed. The data favour cores, and show no preference concerning the NFW part of the halo. In order for ULAs to resolve the cusp-core problem (without recourse to baryon feedback, or other astrophysical effects) the axion mass must satisfy \(m_a < 1.1 \times 10^{−22}\) eV at \(95\%\) C.L. However, ULAs with \(m_a \lesssim 1 \times 10^{−22}\) eV are in some tension with cosmological structure formation. An axion solution to the cusp-core problem thus makes novel predictions for future measurements of the epoch of reionisation. On the other hand, improved measurements of structure formation could soon impose a Catch 22 on axion/scalar field DM, similar to the case of warm DM.

4. Simulations and Theory of Ion Injection at Non-relativistic Collisionless Shocks

We use kinetic hybrid simulations (kinetic ions - fluid electrons) to characterize the fraction of ions that are accelerated to non-thermal energies at non-relativistic collisionless shocks. We investigate the properties of the shock discontinuity and show that shocks propagating almost along the background magnetic field (quasi-parallel shocks) reform quasi-periodically on ion cyclotron scales. Ions that impinge on the shock when the discontinuity is the steepest are specularly reflected. This is a necessary condition for being injected, but it is not sufficient. Also by following the trajectories of reflected ions, we calculate the minimum energy needed for injection into diffusive shock acceleration, as a function of the shock inclination. We construct a minimal model that accounts for the ion reflection from quasi-periodic shock barrier, for the fraction of injected ions, and for the ion spectrum throughout the transition from thermal to non-thermal energies. This model captures the physics relevant for ion injection at non-relativistic astrophysical shocks with arbitrary strengths and magnetic inclinations, and represents a crucial ingredient for understanding the diffusive shock acceleration of cosmic rays.

5. Gas Loss in Simulated Galaxies as They Fall into Clusters 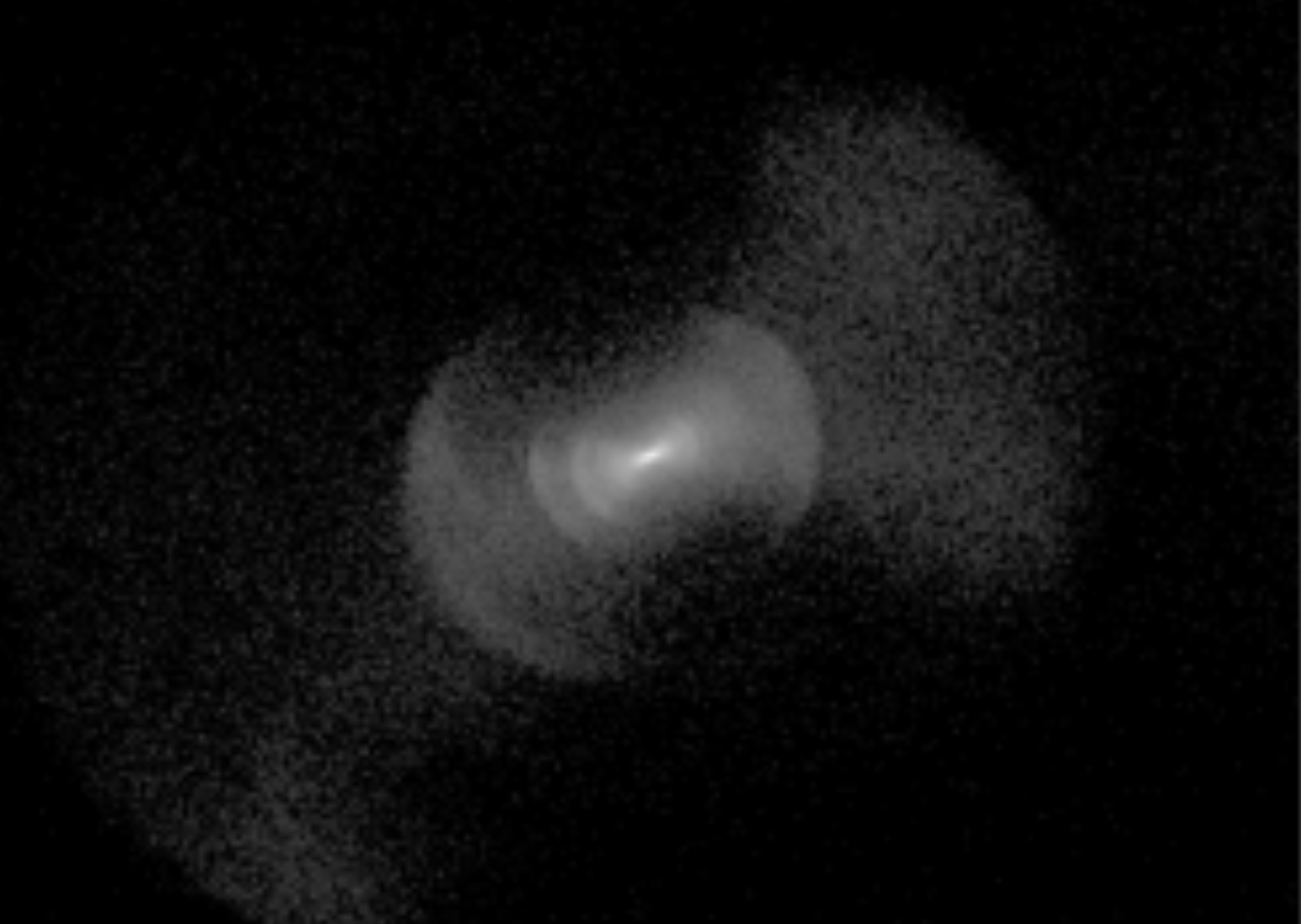